I can remember, it was probably in 2001, when two guys, probably bankers or business administration students ("BWL-Studenten") came to my school and showed us the glorious new currency. They didn't know what ECU stood for (something everybody who ever played Dinoropa should know), if I remember correctly – they generally didn't know much, it appeared. It was the last year Germany used DM, they joined the Euro in 2002, but wanted to do a bit of propaganda for it beforehand, I guess.

These guys had some "special" for us. We could watch and feel one of the new 5 Euro banknotes. They actually had enough banknotes to give one to everyone (we unfortunately had to give them back in the end, but whatever). Now, these banknotes were the old 5 Euro banknotes, which you still sometimes see (as you may have noticed, there are new banknotes now).

When I first saw one of these, I immediately noticed the lack of accessibility of that banknote: No tangible indication of the banknote's value. And of course, at that time, I was still naïve and thought that if somebody was allowed to speak at school, he should be familiar with that topic. Well, these two guys weren't. They weren't even aware of the DM banknotes at that time having such a thing. I had to show them so they at least believed me, but they did not know why the Euro did not have such an essential feature.

In fact, the newest DM banknotes had it: It was not perfect (well, I guess it was maybe one of the first times this has been tried), but it was there (see the dots and bars the red arrow points at):

By the way, the old 10€ banknotes were the same (and the – at the writing of this – current 50€ banknotes still have no tangible indication): 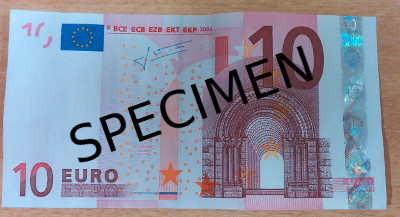 Well, personally I think that the Euro designers just forgot about it, even though this page says something else. Blind people, as far as I know, usually use templates.

However, as you might have noticed (but probably haven't), we have new Euro banknotes now. And these new banknotes have a surprisingly good tangible striation at their side, which is interrupted once for the 10€, and twice for the 20€ banknote: 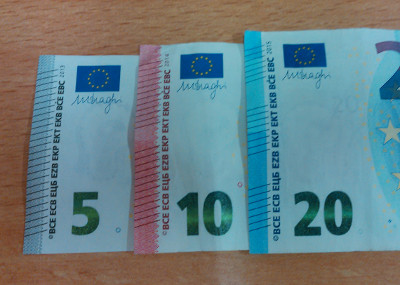 Even I can distinguish them without looking. The new 5€ banknote came out 2013. Which means that it only took them 11 years to fix their bug. Congrats!