There are plenty of Webbrowsers out there. From the widely-used "ordinary" ones like Firefox and Google Chrome to less-widely used ordinary ones like Epiphany and Midori and Konqueror to the less-widely used less-ordinary ones like w3m and the several lynx-derivatives. What they have in common is that they are either made for the usual user and supporting most of the modern websites, or made for the old-school unix-fans and therefore not supporting modern websites using ajax etc. - it seems like using a non-mainstream browser is seen as an equivalent to not using mainstream websites.

Well, there are exceptions like some add-ons for Firefox which add Vi-like keybindings. And there is uzbl. Uzbl is not a browser, it is more like a framework for creating browsers and implementing several features. But the Ubuntu-Package comes with "uzbl-browser" and "uzbl-tabbed", which are two frontends of uzbl that can actually be used as browsers.

This philosophy is good and was good, and unfortunately, this philosophy is forgotten very often by now, even in the Unix-World. And especially when it comes to the Web. On the other hand, for the newb, uzbl is definitely harder to use than other browsers, you have to learn it. It is like Vi, Emacs, Mutt, the Midnight Commander, and several other tools: If you are willing to invest a bit of time to get used to it, you will probably never want anything else again. But if you are not willing to, well, you will not be lucky using it.

A major problem of the uzbl-browsers is the lack of documentation about their keybindings, but this Wiki-Entry tells most of it.

Of all the browsers I know, uzbl is the one which I think has the best philosophy so far, and it is the only alternative "unix-like" browser I know that is really usable in real-life. Will it ever become a widely-known browser - I do not know, but it is definitely possible. 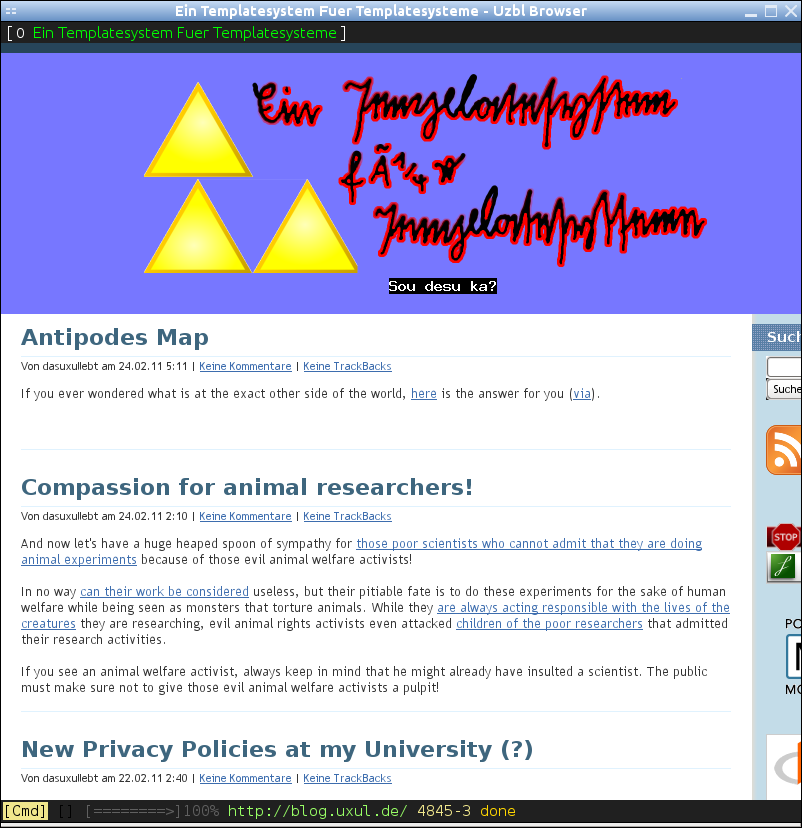