This is the second post of my series on infinity, be sure to read the first one.

Of course, this is not really a paradoxon. The problem lies in the fact that we have an infinitary process in here. As mathematicians do, we write the problem down more formally. Let

-th point where Achilles stands, and

the point where the tortoise stands. We have

, respectively. By definition, we have

, because Achilles always reaches the former point of the turtle. As the turtle has a 1 mile head start, and has

times of Achilles' speed, we set

, which is a shorter mathematical notation for such sums.

Using the axioms we saw in Part 1, we can prove this formally (if you are already a little confused, just skip this proof, it is not necessary for the further understanding): Assume there is an

, then there is a smallest such

. Therefore, it has a predecessor

, for which we must have

was minimal. But then,

Obviously, Achilles will pass the tortoise at some point, and obviously, this point is greater than all

. We want to find out more about this point where he passes the tortoise.

The point we are looking for, is

. In fact, this is provable. But it is a bit harder than the above induction.  What we have here, is a so-called geometric series. As we have

, and thus we have

From this, we see that, the larger

gets, and therefore, for very large

. In fact, if we did a little more preliminary work, this would be a valid mathematical proof, and mathematicians would write

is the symbol for "infinity", and call

the limit of this series. As we wrote

for the finite sum, we can also write

for its limit. The following graphic gives a certain geometric intuition of this fact: 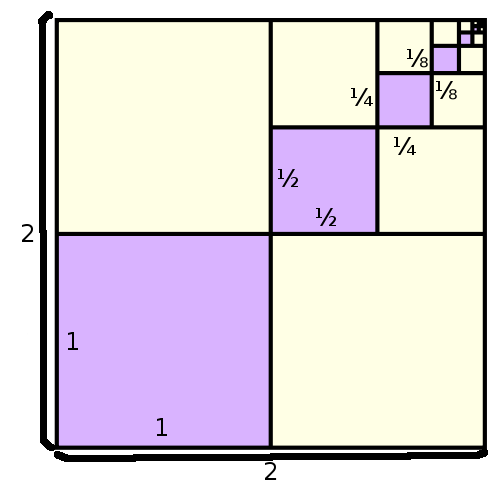 (source)
Of course, it is not always that easy, not every infinite process has a finite outcome. For example, obviously, the infinite sum

does not. However, we know that its finite parts get arbitrarily large, so we might say that

. This series diverges, while the above geometric series converges.
But even worse, consider the series

. Its finite parts are either

. But you cannot find any "tendency" on what happens during infinty. This series neither converges nor diverges.

, and then has the limit

, for a general proof, consider the Wikipedia-article, or any good introduction to calculus.
Even more general, we have

. With this formula, we can prove a fact quite a lot of people are not willing to understand:

means the zero with infinitely many nine-digits after the decimal point. But in fact, we have

, which is, according to our formula,

.
There is a general law about recurring decimal numbers you may know from school, namely,

. For example, from this follows the above,

. More precisely written, we have

, which follows by our above formula by

.
As you see, studying this kind of objects can get very complicated, but produces a lot of interesting outcomes. If you did not quite get the last part, do not worry, it is rather sophisticated for a non-mathematician.
Show comments (Requires JavaScript, loads external content and cookies from Disqus.com)